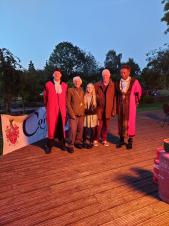 Mayor Chikoto lit the Beacon at Coronation Park on 2nd July 2022 to celebrate Her Majesty's Platinum Jubilee. He was joined by Olivia Shaw who is the youngest member of The Friends of Coronation Park along with Chordless Corby Choir and Lynnette Ballantyne who provided music for the event. 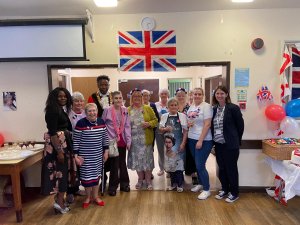 Mayor Chikoto along with the Lady Mayoress, Town crier Dady and ward councillor's were invited to attend Beanfield Centre on Saturday 4th June as part of their Jubilee Celebrations.

Organisor Ann McCarron wrote "It was a truly wonderful Community spirited day. Absolutely everyone had a smile on their face. I and everyone have great memories to last forever."

Mayor Chikoto and the Mayoress were delighted to attend the U3A Great Oakley's picnic in the park on Wednesday 22nd June 2022.

Mayor Chikoto quoted "The Great Oakley U3A is a warm, welcoming members group, that gives its time freely and makes learning and socialising such a joy, with great friendships formed, by like minded people. It was a beautiful afternoon and everyone made us feel extremely welcome" 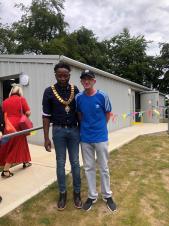 Mayor Chikoto was delighted to be invited on 23rd June 2022 to the official opening of the KHL Community in Shed which is within the grounds of Woodsend Bowling Club, after Corby Town Council awarded them a grant of £1,700.00 that went towards their building.

Working with RBL Northants, a service was held at the War Memorial in Corby Old Village which was hosted by Cllr Alison Dalziel.

The event was open to all with everyone attending the service, invited back to the Ex- Servicemen's club for refreshments.

Also, to coincide with the 40th Anniversary of the Falklands recently, Ex-serviceman Des Wallington gave a talk about his time served there with memorabilia on show.

Corby Town Council would like to thank everyone who helped make this event happen and if anyone would like to be involved next year, please email community@corbytowncouncil.gov.uk 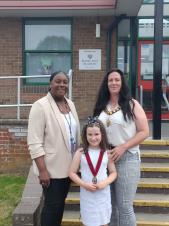 Deputy Mayor Buckingham quoted " It was an honour to be invited to the primary schools fete. Mrs Trotman welcomed us to a very enjoyable afternoon. Well done to the PTFA for arranging such a great summer fete" 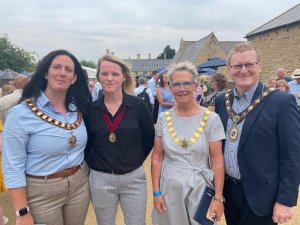 Deputy Mayor Buckingham and her consort were delighted to be invited and represent Corby at The Chester House Estate's Royal Opening which took place on Wednesday 20th July 2022 in celebration of the completion of their National Lottery Heritage Fund restoration project.

As part of a Royal Tour around the estate, led by Business Manager Jack Pishhorn, guests were able to join in when HRH Princess Royal unveiled a plaque, to commemorate the official opening, within the artisan courtyard.

It was so wonderful to have been invited to share in this day. Chester house has 10,000 years of history. Northamptonshire has a wealth of stately homes and that has given enormous value to the wider community. I spent time speaking to the community members that had been invited to the opening and they all shared stories that they have of Corby, particularly speaking of how great the town is to shop in.

HRH Princess Ann met with dignitaries before walking around the estate enjoying the food and drinks, looking into the shop and wedding venue.

I particularly enjoyed hearing about the young people from Creating Tomorrow college who are dedicated to supporting young people with SEND needs in their sixth form years. I hope that their good work will be replicated here in Corby as we too are soon to have SEND sixth form provision. 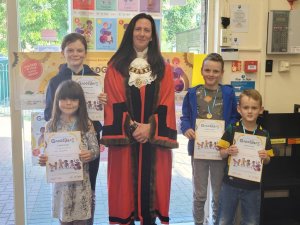 On Saturday 24th September 2022, Deputy Mayor Leanne Buckingham met with the volunteers from Danesholme Library. Whilst the volunteers were meticulously putting the read books away, young people started to come in who had completed the summer reading challenge. Pictured are some of the children we met Brooke, Lola, Ethan and Theo. We spent time drawing pictures, reading books, doing maths and speaking about all of the stories that they have been reading.Thank you so much for the volunteers for making arrangements and for the time that they dedicate to their community. 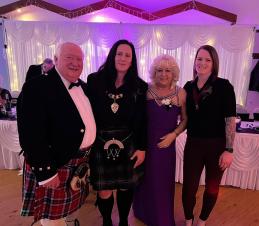 The Grampian Club extended a warm Scottish invitation to our Deputy Mayor Leanne Buckingham and her consort Kathleen on Friday 25th November at their annual St Andrews Night event.This was a ticketed event which included a two course meal, starting with a traditional steak pie and in addition a buffet breakfast which was served at 12.00am.There were also displays by their own highland dancers and pipe band, Point Blank played and were supported by a local DJ.Deputy Mayor Leanne Buckingham said "This was my first time celebrating St Andrews Day although I have lived in Corby for 15 years. It was a beautiful mix of traditional in the modern day. I would like to thank Ian Boyle, his wife Sandra and all at the Grampian staff for their hospitality"Corby Town Council would like to wish all our residents a Happy St Andrews Day today.