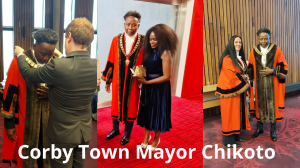 The office of Mayor has a central part to play in modern councils and modern society and many of the traditions of the past are featured today.

Civic regalia, robes and chains are worn on official dates as a symbol of continuity, local identity and of civic pride. Also known as the first citizen of Corby, the position of Mayor is a busy and varied one.

The Mayor attends a variety of engagements throughout the civic year including parades, civic receptions and general visits from the opening of ceremonies to maintaining the interests of Corby and its people. Deputy mayors are members of the local government who serve as acting mayor in the mayor's absence. The Mayor does not receive a salary. The work that is carried out and his time are completely voluntary.

Mayor Chikoto has chosen to support Lakelands Hospice and Home-Start Corby as his charities this year in which he will hold several events throughout his term to raise money and awareness.

How do I invite the Mayor to our local event?

Mayor Chikoto tries to attend as many local events as possible. However it won't always be possible for him to attend every event.

In normal circumstances if the Mayor is unable to attend your event, the invitation will automatically pass onto the Deputy Mayor who may be able to attend on the Mayor's behalf.

To invite the Mayor to your local event, please fill in the form https://forms.office.com/r/Puqu20St61 or contact community@corbytowncouncil.gov.uk