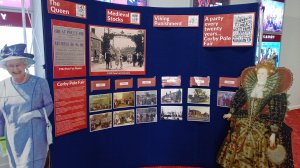 On the 25th of June I shared a report on the Corby Pole Fair Film Premiere that I was privileged to attend on behalf of the Town Council. Today, on Made With Many's media pages, there is a link available to watch the film for Free. This Link has been shared with permission;

Please find the film at the above address. It is a wonderful production, and you can read the full write-up of my visit below.

On the 24th of June 2021 I visited the premiere of the Corby Pole Fair Film at the Savoy Theatre. This remarkable film skilfully stitches together testimonials from previous attendees of the Corby Pole Fair with home footage and stills of the event throughout the ages. Opened by HM the Lord Lieutenant of Northamptonshire James Saunders Watson, we learned about the event's history, and through it, valuable lessons on the History of Corby.

We learned of the origins of many of its traditions, for instance the Viking traditions of hoisting the unsuspecting into the stocks, or the historic toll on the entrances to Corby that were waived to the bold & noble John Anderson, an escaped slave and notable abolitionist from Missouri, who became the first of Corby's Wayfaring Strangers. We learned also of the Origins of the Pole Fair, with the good Burghers of Corby coming to the Crown's aid when Elizabeth I Tudor was lost in Rockingham Forest.

We heard also from many incredible residents about the festivities, which occur every 20 years. Cyril Sellars was a stand-out interviewee, and has attended many a Pole Fair. The whole production was wonderful, and special mentions deserve to go to Paul Balmer, the director and musician responsible for the outstanding soundtrack, as well as Judy Caine, the producer of the wonderful film. A special mention ought also to go to young Jakob Litwin, who worked as a talented cameraman on the film, and who is just 14 years old.

All in all, the premiere was a wonderful event and I was privileged to be one of the first to see it. Many thanks go to Made With Many for the event, they can be found at www.madewithmany.org, who are looking for volunteers for the latest Pole Fair due to take place next year during Her Majesty's Platinum Jubilee. I would encourage all Corby's citizens to get as involved as possible, not only because it is a valuable celebration of what makes Corby special, but also because coming out of the pandemic this is exactly the kind of big celebration that we need to lift the People's spirits.