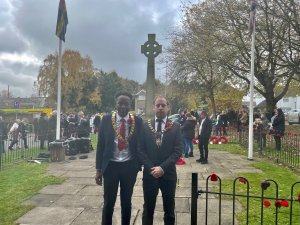 Corby Towns' Mayor and Deputy Mayor were in attendance at the war memorial in Corby Old Village to pay tribute to the service men and women who have died in past conflicts.

Cllr Lawrence Ferguson, the Town Mayor laid a wreath on behalf of Corby Town Council in order to commemorate the anniversary of the end of the First World War. The event was also attended by ex-service men and women and members of the Royal British Legion along with a number of members of the community and Scout groups.