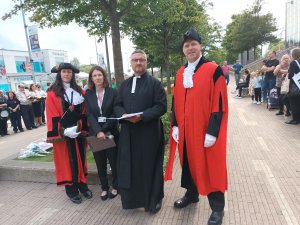 Corby Town Council today held an event to read the Proclamation of King Charles III and a ceremony to mark the passing of Queen Elizabeth II. The event was well attended with around 150 people who gathered at the Cube in George Street to mark this historic event. Town Crier Anthony Dady read the Proclamation to the crowds that had gathered. The proclamation of the new Sovereign is a very old tradition which can be traced back over many centuries. The ceremony does not create a new King. It is simply an announcement of the accession which took place immediately on the death of the reigning monarch. In an age where modern methods of communication convey news around the globe in an instant, the proclamation is no longer the means by which people learn for the first time that they have a new Monarch. Today, however, is one of the first occasions when communities have an opportunity to come together and reflect on the moment in our nation's history when the reign of our longest-serving Monarch came to an end and our new Sovereign succeeded. Chains of office were replaced with badges worn with a black ribbon to honour the period of national mourning.

Reverend Paul Frost led the event with prayers and gave thanks for the life of Queen Elizabeth II. The Deputy Lord Lieutenant Mandy Young (pictured) was in attendance, along with Beanfield Neighbourhood Association, Kingswood Scouts, Glendon Scouts, the RAF, GMB, Community First Responders among others who laid wreathes.

Members of the public were invited to lay wreaths in the place of remembrance for Corby and local piper Michelle Murray Jewel finished with a rendition of Flowers of the Forest. This piece of music was a lament originally commemorating the death of King James IV in 1513 at the Battle of Flodden.

Cllr Mark Pengelly said I would like to thank " Cllr Martyn Reuby Deputy Leader, Cllr Alison Dalziel and all the staff and members of Corby Town council for helping put this historical event together and all those who participated today. "